Landscaping is a wise investment! Sadly, the investment in landscaping is often the last thing on your mind and is down to whatever is left over at the end! Your landscaping will look its absolute best at all time without any stress to you because of our ability to engage in high-quality work. Here are all the basic landscaping do’s and don’ts to help you plan and maintain your home lawn and gardens, plus how it all affects real estate.

6 Landscaping Mistakes That Will Destroy Your Yard 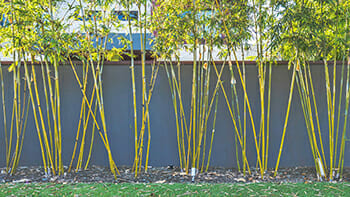 As warmer temps approach—quite slowly, depending on your part of the country—you might already be sweating your lawn. And with good reason: Good landscaping can add up to 28% to the overall value of a home.

But even for those blessed with the greenest of thumbs, landscaping offers plenty of potential for disaster: Do too little, and the effect won’t be noticeable. Too much, and everything might die. And introduce the wrong plant? Say goodbye to your entire yard. Scary!

Here are six big DIY landscaping pitfalls to avoid like a case of poison oak—straight from the pros!

Don’t stop there—flatten (loosely!) your mulch to avoid a volcano. Don’t suffocate your newly planted trees with the dreaded “mulch volcanoes”—piles of the insulating organic matter that rise as high as a foot up the trunk, says central Virginia arborist Michael Rittenhouse Rigby.

Mulch is designed to control the soil temperature and keep it moisturized—but to do so properly, it must be applied loosely. Tight packing strangles the tree and softens the root collar, a nonwaterproof section of the tree’s trunk. The result: rot, invasive insects, and suffocated roots.

“Mulch mounds may look like the norm, but it’s a harmful practice,” Rigby says. Remember kids: Mulch mounds are not cool.

Feathery fountain grass can pose a fire hazard. One of the biggest mistakes an amateur landscaper can make is choosing an invasive plant, which can quickly grow out of control.

The biggest offender? Bamboo—it’s almost impossible to control. Without your own giant panda to do the trimming, you’ll find your yard overrun with tall, tough stalks that take years to fully remove.

Other offenders? The plants often found in “drought-tolerant” sections of big-box nurseries, according to Cassy Aoyagi, the president of Form LA Landscaping in Tujunga, CA.

In particular, beware of Mexican feather grass, fountain grasses, and pampas grasses, which can be fire hazards due to their dry leaves and flowering stalks.

“Having this sort of foliage on slopes can be especially dangerous in an El Niño year,” Aoyagi says.

Just like your class photos, tall ones go to the back. Before you even put your hands in the dirt, carefully work out a design on graph paper to understand your space requirements, advises landscaper John Crider of Crider Landscaping in Soddy Daisy, TN.

“Measurements are key,” Crider says. “Like a good carpenter, measure two times and cut once.”

For small areas, stick with flowering perennials and skip large shrubs. As a general rule, taller plants should go toward the back and smaller plants in front.

Once you know what size foliage can fit without overcrowding, research specific plants (Crider suggests using Pollinator Partnership) and sketch them into your design.

And even if it can fit, don’t plant too big—that’s a rookie mistake.

Large foliage might look impressive, but it has a hard time taking root. Small foliage grows nicely and has a better chance of survival.

4. Using too much gravel

This gravel’s too hot to handle. With drought-tolerant landscaping, you can have too much of a good thing. Enter gravel, landscaping’s double-edged sword.

Gravel does save water. But it also reflects heat toward any plants nearby, damaging all but the hardiest plants. Any heat that gravel doesn’t reflect, it absorbs, essentially baking the roots of your plants.

And that’s to say nothing of future plantings: Gravel can get mixed into the underlying soil, making it too hard to absorb rainwater, Aoyagi says. And it’s nigh impossible to add more foliage to hard, dry soil—meaning you’ll be stuck with the plants you already have.

Fake grass can still give you some real problems. There’s nothing wrong with choosing fake grass over the real stuff, especially if you live in a drought-ridden region. Today’s artificial turf is almost indistinguishable from a live, lush lawn, minus the upkeep.